Create a light sensor using an ESP8266 and an LDR for 5€, directly send the measures to a Redis database via a Wifi/TCP/IP stack and publish a push notification to notify your frontend user interface (described in a future blog post) that there is a new value to display in realtime. Redis is an in-memory key-value store with persistency to disk, high-availability and clustering. It is so easy to use that a simple micro-controller, such as an Arduino or an ESP8266, with a TCP/IP stack can connect and use it.

You can find links to the related materials at the end of this post.

I had to build about 200 such devices, for the cheapest price, within as short time as possible. The idea was to build these devices and teach how to use them with Redis in our French Redis meetups. The attendees can keep the device after the meetup to continue to play with it at home.

It had to be as cheap as possible (reached less than 5€), as easy and fast to build as possible (30 seconds less per device is important when building 200 of them), as versatile as possible to connect other sensors (thermistors, digital sensors, I2C sensors, SPI sensors, …).

First of all, you need some hardware. Despite I am an Arduino addict it would require a Wifi shield (expensive) and some soldering (longer to build). I chose to use a small breadboard, an all-in-one ESP8266, a resistor and an Light Dependent Resistor (LDR or photoresistor), that can be easily replaced with a thermistor for the same price. 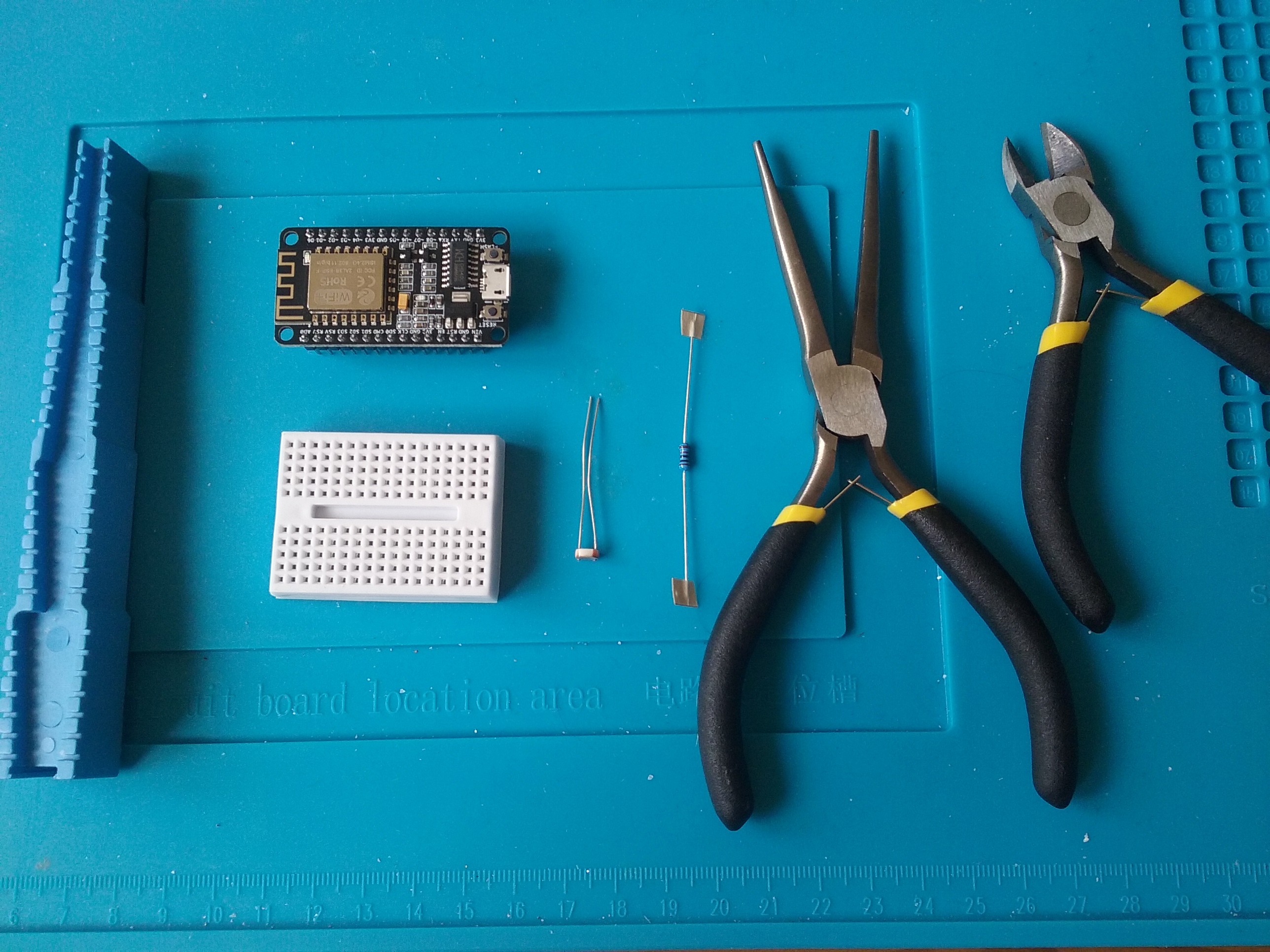 My prices have a discount because I ordered more than 100 of each.

Here are the steps. Links are opening detailled pictures of steps.

Congratulations !!! That’s ok for the hardware !

There are several IDE and toolchains available to compile C/C++ code for microcontrolers. I chose to use the very simple but sufficient IDE provided by the Arduino project. It is generic, but can automatically download the cross-compiler that runs on your computer to compile for your target device and it can also download and include a lot of helper libraries from internet repositories.

Extract the archive in a folder anywhere in your filesystem. The IDE will be executed from this folder and all your files will reside inside this folder. The folder can be moved anywhere anytime.

The IDE can be customized to be portable and have everything in a single folder (the IDE itself, the configuration, the toolchains for the devices and your code). We only need to create a portable subfolder that will host all your code, all your libraries and your IDE configuration file (like some kind of home directory).

I prepared one and created a configuration file with the external repositories. As said previously, a cross-compiler toolchain needs to be installed. As the binaries depend on your computer and OS, I can only preconfigure the repository from which you’ll have to download and install them by youself. A Redis helper library and an empty code template are also included in the customization file.

The file will also add the full source code of this blog in your sketchbook.

You’re done with the IDE installation and configuration.

Given that the enterprise edition is seen as a single Redis instance by the applications, regardless if there is sharding and/or replication behind, and in order to keep this post not too long, I’ll describe the Redis community installation, without clustering or high-availability, and use it.

To avoid admin permissions requirement, to keep Redis portable and to master the used version, I will not use the pre-packaged redis server available in most of the Linux distributions repositories, but I’ll download, compile, configure and run the Redis version available on the official Redis community homepage .

Download the source code from the following link Redis source and unzip it in a folder. Open a terminal inside this folder and type make. Once the compilation is complete, run Redis from here without installing it in your system, by typing ./src/redis-server --protected-mode no (without turning off the protection, you will only be able to connect from localhost).

You’re done with Redis. Amazing, isn’t it, only four commands (download, extract, build and execute) and you have an up-and-running portable installation.

Now, it is time to start coding!

You should have an empty application skeleton in your IDE when you start it. Basically, there are two mandatory functions : void setup() and void loop(). When you reset it (either hard reset with the button, from the USB connection, by powering it or soft reset from the application), it executes the Arduino bootloader. if data is available on the serial link (bridged with the USB connector), it stores the data in the flash memory and execute the program from flash. If there is no data, the bootloader directly executes the program from flash memory.

At each power cycle or reset, the program executes once the setup function and then iterate on the loop one, endless.

So, you need to initialize the serial console (for debugging) and open a Wifi connection from the setup function. Then, at each loop iteration, you will check if you need to read the sensor’s value and send it to Redis, if yes, you will check that you have an active connection to Redis and open it if needed, and you’ll send your data.

First, initialize the feedback with the serial console and read the sensor’s values.

In the setup function, initialize the serial console, wait for its initialization (only useful for some Arduino such as the Yun, but without drawback on others).

In the loop function, print the sensor’s value, from the Analog-Ditial-Converter, to the serial console.

Test your sketch with the tick icon in the toolbar, or from the menu Sketch > Verify/Compile or with the keyboard shortcut Ctrl+R.

If you have no error, upload it to the device using the arrow icon, the menu Sketch > Upload or the shortcut Ctrl+U. As soon as it is uploaded, it is executed.

Start the serial monitor with the right magnification glass icon, from the menu Tools > Serial Monitor or with the keyboard shortcut Ctrl+Shift+M. Choose the same baud rate as in the sketch (115200) and observe.

You can see the speed of the loop function. Despite you could introduce a void delay(long ms) call in the loop, it would be a bad practice, the loop function needs to be executed as fast as possible, without blocking, this is the main event loop. It is better to initialize a millisecond timestamp at each print and to only read a new value after a timeout :

Compile, upload and observe… It is better, one value every 5 seconds.

Lets begin with the setup function. You need at least a Wifi network name and password to connect to.

Add the ESP simple Wifi header, define your Wifi credentials and add the following at the end of the setup function. I also included a LED blinking during the WIFI connection, to have an hardware status feedback, and resetting lines (commented) in case of unexplainable issue.

Now, it is time to check that you have an opened Redis connection. For that, we use a WiFiClient object. It can open a TCP connection to an IP or an hostname and a port number. It will take care of the DNS resolution, but might keep the IP in cache (this could be an issue if the DNS are involved in the high-availability architecture). The SSL encryption support is quite limited in the ESP, but we wont use it in this post.

The idea is to check that we have an opened redis connection at each sensor read, if not we open it.

Define your Redis connection, add a WiFiClient object and change your loop function :

Now, it is time to actually send commands to Redis to insert the value at the begining of a Redis list using LPUSH. The list key is built from the concatenation of the string “v:” and the the device’s MAC address.

Add this code immediately after the connection test.

I used a C++ String to make the code shorter.

Redis server send back a reply to every Redis command, even when there is an error. These replies are stored in buffers on the device. When all the buffer are full, the device can not send new commands anymore, until one of the buffer expires and become available (every second). Thus, I could wait synchroneously for the reply, but it would be a busy loop, even if it is usually fine because Redis server replies very fast, it is a bad practice. I chose to test for a reply at each loop iteration and to consume it. Just before the end of the loop. 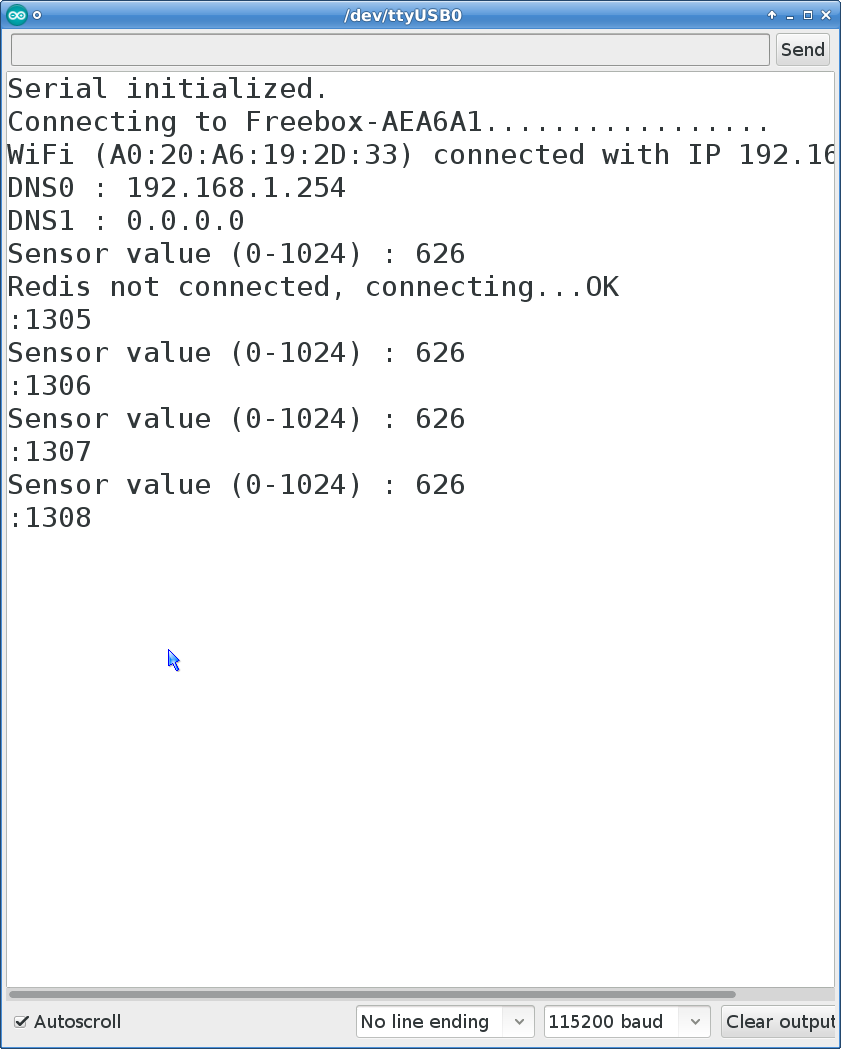 Push notification with a PUBLISH

As an exercice, you can send another command using the REdis Serialization Protocol protocol to Redis, so that it will notify all listening (SUBSCRIBEd) application that you updated your value list. The idea is to send PUBLISH chan:<MACAddr> <lastValue>. With such a message, the other application won’t have to get the value from the list, as the value is already part of the message.

You will be able to observe the results if you connect to your Redis server with the src/redis-cli -h <IP> -p <PORT> tool and if you type SUBSCRIBE chan:<MACAddr>…

If your ESP throw an ugly stack trace on your serial console, you can debug using a lot of Serial.print, but you can also install The ESP Exception decoder plugin in the IDE.

If you want to see what happens on your Redis server, you can monitor it using the src/redis-cli -h <IP> -p <PORT> tool and typing MONITOR.

You can connect the LDR to a digital pin instead of 3.3V. So, you can choose to give power only when you read the value, to save energy.

Another solution is to use the internal pull-up resistor to remove the external pull-down one and connect the LDR between AD0 and GND. The values will be inverted, but you save 0.02€. Then, you can disable the pull-up resistor between readings to save energy.

You can also use sleep commands to put your device in sleep mode between reading/sending values, to save energy. This is more complex, but can lower down the current to few µA most of the time !!! Useful for battery powered devices that should last a long time without maintenance.

If you want high-availability, either you need to implement parts of the sentinel protocol, or parts of the cluster protocol or to use a proxi such as the one provided in the enterprise edition.

Add SSL between the device and Redis server, then, you can also use the AUTH redis command to add some security to your database.

You can implement a library to encode commands in the REdis Serialization Protocol and another one to manage the redis connection, with pipelining.

While waiting for a next content, if you found this post interesting, feel free to subscribe to the RSS feed or to share it on your prefered social networks. You can also ask questions or give feedbacks in the comments below.

You can support me on and on Patreon and Tipeee. This will help me to buy video hardware to improve the quality of my contents.